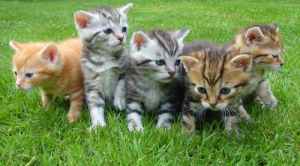 What’s going on at Alley Cat Allies? And why aren’t the so-called charity watchdogs paying attention?

Alley Cat Allies is a $10-million charity that calls itself the “global engine of change for cats.” It’s got issues–poor governance practices, a board that failed to meet for nearly a year and a disgruntled workforce with high turnover, according to reviews on Glassdoor and my own conversations with a half dozen current and former staffers who raise troubling question about the charity’s practices.

Typical is Katie Cook, a former fundraiser for Alley Cat Allies. “I was miserable,” she says. “I never worked in a more horrible place, and I worked for Roger Stone for three years.” Which might be funny, except it isn’t. On GlassDoor, only 18 percent of the workers who posted reviews say they approve of Becky Robinson, the president and founder of Alley Cat Allies.

There’s more. Alley Cat Allies has donated at least $20,000, and possibly much more, to a pig sanctuary, despite the fact that its mission and its messaging to donors focuses exclusively on cats. It acquired two homes in suburban Virginia, including one next door to the home of Becky Robinson; the charity says they were investment properties but in neither case did Robinson inform the full board about the deals or seek its approval. Alley Cat Allies promises on its IRS tax return to make its conflict-of-interest policy and financial statements available on request, but it has declined my requests to see them.

This is a problem. Indeed, it’s the main reason why I’ve paid attention to Alley Cat Allies. Millions of donors turn to Charity Navigator to become smarter about giving. Its website says: “Use our objective ratings to find charities you can trust and support.” GuideStar isn’t strictly speaking, a ratings agency, but its website says that “millions of people use GuideStar information to make decisions about nonprofits and the work they do.”

Charity Navigator gives Alley Cat Allies a four-star rating, which is said to describe an organization that “exceeds industry standards and outperforms most charities in its cause.” GuideStar says its platinum designation demonstrates that “you are an organization that is focused on measuring your progress and results.”

I first reported on Alley Cat Allies in a Nov. 6 story for The Chronicle of Philanthropy headlined The Limits of Nonprofit Oversight and then in a blog post headlined Alley Cat Allies, and the charity “watchdogs” that aren’t. The stories spotlighted governance problems at the charity, which is based in Bethesda, MD, and has been run by Becky Robinson for 28 years. Among the irregularities was the fact that the nonprofit’s board was chaired for many years by Donna Wilcox, a paid vice president of the charity who reported to Robinson until Wilcox left her job last month.

Some questions for Alley Cat Allies

I subsequently learned about other problems. By email and by registered letter on Dec. 13, I asked Alley Cat Allies a new set of questions. With all due respect to Charity Navigator and Guidestar, these are questions they might want to ask, too. Here they are:

Past criticisms of governance: In 2004 and again in 2012, the BBB Wise Giving Alliance, another charity monitoring organization, pointed to problems with ACA’s governance. (See this 2004 story from the Chronicle of Philanthropy and this this archived page from 2012 .) What, if anything, did ACA do in response?

Transparency (1): BBB Wise Giving Alliance now says that ACA is not an accredited charity because ACA has not responded to its requests for information. Is this correct? Why has ACA not responded?

Transparency (2): The ACA board is no longer listed on the website. Who are the board members and the board chair? Has Donna Wilcox stepped down from the board? I’m told that Rachel Gorlin, Irini Dline and Karyen Chu, all of whom served on the board, have left the board. Is that true?

Transparency (3): ACA told me that the homes owned in Virginia were rental-producing properties, purchased as part of an investment strategy. But Part VII, Line 6, of your most recent IRS tax return, for the year ended July 31, 2017, lists no rental income. Can you explain?

Mission creep? On your most recent IRS tax return, you list a $20,000 grant to PIGS Animal Sanctuary in Shepherdstown, WV. I’m told that Alley Cat Allies has continued to make grants to PIGS during 2018. I understand that PIGS provides direct care for some cats, but I’m told by your employees and former employees that the payments to PIGS have far exceeded the cost of caring for cats. Can you say how much you have paid to PIGS, and explain why?

Fundraising costs: In an anonymous letter to Charity Navigator provided to me by a former executive with Alley Cat Allies, this executive writes:

This executive made similar allegations to GuideStar. Can you respond?

I asked Alley Cat Allies to get back to me in a week. I heard nothing.

New questions also arose about the home purchases, which Alley Cat Allies said had been approved by an “investment committee” consisting of CEO Robinson, vice president Wilcox and former board member Karyen Chu. But my sources say that the investment committee was not formed until late in 2015–after the first house was purchased.

Then there’s the pig sanctuary. Current and former staff members say that Alley Cat Allies has made numerous payments to the pig sanctuary; one current employee estimated that PIGS has been given well over $100,000. That seems like a lot of money to care for cats. Becky Robinson’s assistant, I’m told, did administrative and payroll work for PIGS.

On the issue of how to account for fundraising costs, Alley Cat Allies is surely not the only nonprofit organization to categorize its direct mail as programming or advocacy, in an effort to keep its overhead ratio low. The lines between the two are blurry. But when a senior fundraising executive inside the organization reports issues to Charity Navigator and GuideStar, even in an anonymous letter, that should be cause for concern.

“I know how much donors rely on entities like Charity Navigator and GuideStar,” says Laura Ramos, a former Alley Cat Alley employee. “They need to know that those places don’t scrutinize things like staff turnover, office culture, board health, or really anything beyond the very basic information pulled from the 990.” Ramos worked in programming and communications for six years at Alley Cat Allies.

Other former staffers were troubled by the way the place was run. Robinson and her deputy, Charlene Pedrolie can be unpredictable and harshly critical, they told me. These staff members had concerns about the lack of HR policies, but they didn’t feel as if they could bring their concerns to the board. Turnover was high.

Alison Grasheim, who worked in the communications department of Alley Cat Allies between 2008 and 2013, told me: “It could be a healthier organization if it followed the best business practices.”

Patricia Jones, a former media consultant, told me: “I was a consultant for Alley Cat Allies and finally had to fire them as a client in 2014 as the toxic and dysfunctional environment grew increasingly worse.”

Some former employees were reluctant to speak, in part because Alley Cat Allies has pursued long and expensive litigation against Elizabeth Putsche and her husband, Jason. Elizabeth Putsche formerly worked in communications for the organization, and Jason supplied it with hundreds of photographs. It has used the litigation to subpoena documents from former employees, including their contacts with me.

Alley Cat Allies desperately needs an engaged, independent board. I’m told that three new board members have been or will be appointed–a DC-based lawyer named Anne Lynch, an ethics and compliance officer named Justin Oravetz, and a finance and audit executive named Kevin Lee. I contacted all three, simply to ask whether, in fact, they had joined the board. None responded. Not an encouraging sign.

It’s important to say here that information providers like Charity Navigator and GuideStar can’t look deeply into every nonprofit in America. They have small staffs, cover thousands of charities and rely on self-reporting by the charities, most of whom, it’s safe to assume, are honest and open.. They can’t worry about workplace morale or try to figure out whether the nonprofits actually do any good–which, in a better world, would be the point of evaluating charities.

But the Alley Cat Allies story illustrates just how little investigating they do. Here you have a charity that has been denied accreditation three times by BBB Wise Giving Alliance, that has a board structure that falls well short of best practices and that was the subject of anonymous but detailed complaints from an insider. What, I wonder, does a nonprofit have to do to fall out of favor with Charity Navigator and GuideStar?

11 thoughts on “Cats, pigs, watchdogs–and the limits of nonprofit oversight”