James Siegal is the new CEO of KaBOOM!

One of the hardest jobs for the board of a nonprofit — or a corporate board, for that matter — replacing a longtime executive director or CEO. It’s harder still when the chief executive founded the NGO or business. And hardest of all when the outgoing CEO is a charismatic leader with whom the enterprise has become closely identified.

This was the challenge facing the board of KaBOOM! when Darell Hammond, the founder and CEO, decided last fall to step down to follow his wife, Kate Becker, to Albania, where she is heading up the Peace Corps office. The board announced Darell’s departure in November (as I reported). By the end of January, it had named James Siegal, the group’s president, to replace him. Best known for building playgrounds, KaBOOM! is a national non-profit dedicated to giving all kids, particularly poor kids, “the childhood they deserve filled with balanced and active play, so they can thrive.”

Last week, I sat down with James Siegal and talked by phone with Ron Lumbra, KaBOOM!’s board chairman, about the transition, which by all accounts has gone smoothly. It’s a story worth telling because so many nonprofits and companies bungle succession.

In fact, by coincidence, new research about nonprofit leaders released last week says that an astonishing 77% of nonprofits reported not having a leadership transition plan or a leadership training program in place. Why astonishing? Because any board that does not have a succession plan is, frankly, negligent.

Even more dismaying is the survey finding that 61 percent of CEOs of nonprofits do not get annual performance reviews from their board. Nearly half said they do not have a written strategic plan. What, for goodness sake, are these boards doing?

The Concord Leadership Group, a consultancy that specializes in nonprofit leadership, published the research after surveying more than 1,000 nonprofit executives, staff members, board members and volunteers. The “lack of planning for leadership or succession was consistent across organizations of all sizes,” the report says. Marc Pitman, the group’s leader, calls that “shocking” in a blog post. 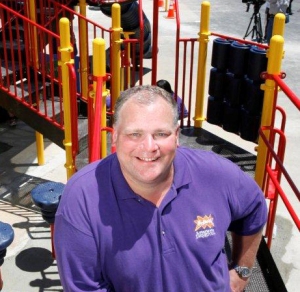 Back to KaBOOM!  In 20 years, Darell Hammond built from scratch an organization that has built more than 2,700 playgrounds in low-income neighborhoods across America. It helped communities build another 13,000 places to play. It employs more than 100 people, and has a budget that tops $25 million a year. Hammond has been willing to revamp the NGO’s approach a couple of times, first by building an open-source model to give away its knowledge about playgrounds and, more recently, by going beyond playgrounds to try to drive deeper social and behavioral changes around play. His personal story–he was one of eight children who was raised in a group home and never finished college–was very much intertwined with KaBOOM!

James Siegal has a more conventional, if stellar, resume. He graduated from Princeton and Harvard Law School, and joined Paul Weiss, a New York corporate law firm. He then went to work for Elliot Spitzer, who was New York state attorney general, in an office overseeing charities, and from there moved to Washington to become vice president of Independent Sector, a coalition of nonprofits and foundations. He worked for two years as chief of staff to the head of the federal Corporation for National and Community Service before joining KaBOOM! in 2012.

Ron Lumbra, the KaBOOM! board chair, says: “When James was brought in, he was brought in with succession in mind. We didn’t have a timeline.” This was smart. If an NGO doesn’t have a strong No. 2, it should train or recruit one, ideally one whose talents complement the CEO. Once Siegal was hired, he was given plenty of opportunity to spend time with the board, as well as with the corporate donors who provide much of the financing for KaBOOM!

Lumbra’s day job is executive search — he spent 17 years at Russell Reynolds and now oversees the Americas for Heidrick & Struggles — so he’s exceptionally well qualified to talk about leadership transitions.

“It’s very, very, very difficult to replace a founder. Especially an inspirational founder like Darell Hammond. You don’t clone Darell,” Lumbra tells me. Hammond is a cheerleader-type who brings his passion to work every day.

The KaBOOM! board, after learning about Hammond’s departure, deciding that it didn’t need to conduct a formal search for a successor. “We got very comfortable that the right answer was James,” Lumbra says.

Siegal, who is 45, connects emotionally to KaBOOM! through his family. His grandmother was a public school teacher in a poor neighborhood of Brooklyn, so he was moved by the chance to join in a playground build in Crown Heights, near where she had lived. Another playground went up in a neighborhood devastated by Hurricane Sandy, near where he had vacationed as a kid. The father of three daughters, he’s been able to share KaBOOM!’s work with them.

“A KaBOOM! playground build—there’s nothing like it,” Siegal says. “It’s a transformative experience.” Building playgrounds will always be part of KaBOOM!, he says: “There’s still a great demand for it.”

The challenge for Siegal will be to expand KaBOOM!’s impact by persuading cities to redesign themselves to promote play–a daunting goal. There’s tons of evidence about the benefits of play, he says. “If kids play more, they have better physical skills, they have better cognitive and creative skills, they have better social and emotional skills,” he says. What isn’t clear is how to get kids to play; the theory at KaBOOM! is that they will play if they are given safe, easily accessible places to play, everywhere they go.

Last week, KaBOOM! announced a national competition to award $1 million in prizes for the best innovations in urban design and redevelopment that will help make play easy, available and fun for kids and families. Dubbed the Play Everywhere Challenge, it was developed with funding from the Robert Wood Johnson Foundation, Target and Playworld and with support from the US Department of Housing and Urban Development and the National Endowment for the Arts.

A final thought: These issues of succession and leadership development are in no way new to the social sector. The Bridgespan Group, which has published reams of research on nonprofit leadership, says that in survey after survey, succession planning comes out as the top concern. Yet, as Libbie Landles-Cobb, Kirk Kramer and Katie Smith Milway wrote last fall in the Stanford Social Innovation Review: “Only 30 percent of C-suite roles in the nonprofit sector were filled by internal promotion in the past two years—about half the rate of for-profits.” Read their story to understand why this is a problem and what can be done about it. Not surprisingly, foundations can play a role by supporting leadership development at their grantees.

Nonprofit CEOs also have key roles to play, of course. They need to share power, set aside their egos and mentor others. They also need to get out of the way once their time atop an organization is over, hard as that can be. “Sometimes founders can’t let go,” notes Ron Lumbra.

Darell Hammond will have to let go since he’s leaving soon for Albania, but others say he began planning for his exit years ago. “The selflessness of Darell, that’s been amazing,” Siegal says. Darell told me last fall that he hopes that his “legacy will not be that I founded KaBOOM! but that I was able to leave, and the organization did better without me.” It’s too soon to say whether that’s the case. But so far, so good.

[Disclosure: Darell Hammond and I served together for three years on the board of Net Impact, where we talked a lot about succession.]