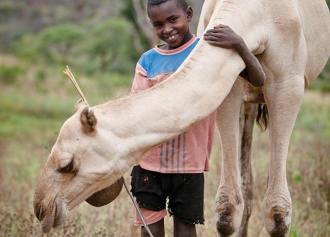 “Camels help carry kids over the poverty hump,” says Save the Children.

What do the world’s poorest people want? Clean cookstoves? New shoes? Fresh water?  A toilet? Eyeglasses? Nicholas Kristof recommends, among other things, a flock of ducks. What about a solar lantern, a baby blanket, a bicycle, or a camel?

No one said gift giving is easy.

Of course, I have no idea what poor people want. (It’s hard enough for me to choose a present for my wife.) That’s one of the reasons why I’m making my biggest donation of 2015 to GiveDirectly, a charity that gives unconditional cash transfers to extremely poor people in Kenya and Uganda. It’s the philanthropic equivalent of sending a gift certificate to that niece or nephew you don’t know very well.

More about GiveDirectly in a moment but first, a bit of context. My 31-year-old daughter Sarah has been an activist and a philanthropist for the past eight years, first at American Jewish World Service and currently at the Astraea Lesbian Foundation for Justice. I’m a longtime business reporter and a newcomer to the world of foundations, nonprofits and global development. A spirited conversation over Thanksgiving dinner led to today’s post, about my charitable giving, and tomorrow’s, in which Sarah will argue on behalf of Black Lives Matter, FRIDA: The Young Feminist Fund and Astraea’s Global Arts Fund. We’re putting real money behind what Sarah has called the Gunther Giving Showdown. Please let us know what you think–or recommend your favorite charity–in the comments.

Why GiveDirectly? In large part because it’s one of four “top charities” recommended by GiveWell, the meta-charity that does deep analyses of a dozen or so nonprofits that aim to help the global poor. Picking charities is a bit like picking stocks: It’s a job that’s often best left to professionals. GiveWell spends thousands of hours analyzing charities; all of its top charities operate programs that are backed by evidence, thoroughly vetted and transparent. Like GiveWell, I start with a strong bias towards helping the global poor because of my beliefs that all lives are of equal value, that the needs are greatest overseas and that our dollars go farther in poor countries.

Directly transferring money to poor individuals allows them to purchase that which they believe will help them most. Strong evidence indicates that cash transfers lead recipients to spend more on their basic needs (such as food) and may allow recipients to make investments with high returns, with no evidence of large increases in spending on items like alcohol or tobacco.

I blogged about GiveDirectly in June after meeting Paul Niehaus, an economist and co-founder of the nonprofit, with Michael Faye. He told me that direct cash transfers have the potential to end extreme poverty. Giving $1,000 to every extremely poor person in the world — defined as those making 65 cents a day or less — would cost $65 billion, roughly half of what wealthy governments and NGOs spend annual on development aid. How much good that development aid accomplishes is hard to say.

We don’t know for sure whether cash transfers have lasting effects on the lives of the poor but some early evidence is encouraging. A 2013 study of a government cash transfer program to young people in northern Uganda found that recipients enjoyed a 49 percent increase in their earnings after two years and a 41 percent boost after four. To its credit, GiveDirectly welcomes independent evaluations of its work.

Giving directly to the poor appeals to me because many years of reporting on big business and big government have left me with a strong dislike for bureaucracy and a skeptical attitude toward claims of expertise. I like the idea of not just giving away money but giving away the power to decide how that money will be spent. In that sense, GiveDirectly is the ultimate in democratizing philanthropy. 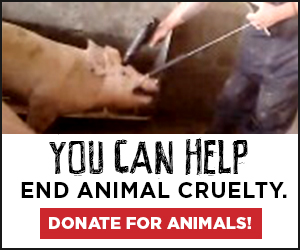 As part of this blogging showdown, I’m also making a donation to alleviate the suffering of farm animals. I’ve become troubled in recent years by the way chickens, pigs and cows are treated on factory farms. About 9 billion animals (most of them chickens) are killed every year in the US to feed people; that’s more than the number of people on the planet. Most of those animals would appear to live miserable lives. Curbing factory farming would have significant environmental benefits as well because livestock production makes inefficient use of land, water and fossil fuels.

But how best to help farm animals? Again, I’m going to leave this to the experts, in this case to a scrappy little nonprofit called Animal Charity Evaluators (that I blogged about here.) You can donate online to ACE and they will divide the proceeds among their three top-rated charities: Mercy for Animals, The Humane League, and Animal Equality International. I’m trying to be provocative here–this is my first donation ever to an animal charity–in order to suggest that those those of us who eat meat (including me) reflect on the consequences of our dietary choices.

My third recommendation is GiveWell. They’re the best charity evaluators around. As such, they create pressure on other evaluators, donors and nonprofits to do a better job of rigorously measuring their impact. If evaluators and portals like GiveWell,  Guidestar, a revamped Charity Navigator and brand-new Impact Matters gather scale and influence, they could help create a “market” for good in which more dollars flow to high-performing nonprofits and less to those that are mediocre or worse.That would be a very big deal.

Finally, in the interests of full disclosure, I made two other substantial donations this year, one to my synagogue, Adat Shalom Reconstructionist Congregation in Bethesda, Md., and one to Net Impact, on whose board I served for the past six years. I made smaller gifts to Yachad, Global Giving, Kaboom!, and Boston Review.

Tomorrow Sarah will write about her giving, which takes us in a different direction. Get ready for, among other things, Shut Your Sexist Mouth Up, Russia. 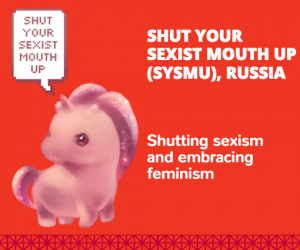 3 thoughts on “The Gunther giving showdown: Show me the money (and the evidence)”