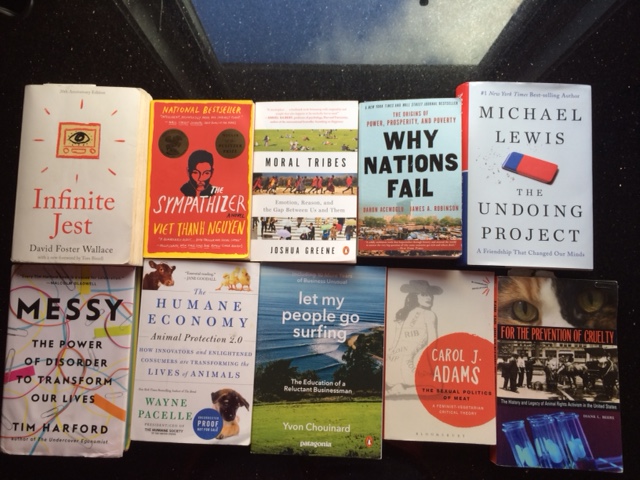 I’m enjoying a month-long break from writing and blogging (with the exception of this post) and spending much of that time reading books. The other day, I spent a couple of hours curled up with a book during the afternoon. What a treat! Looking back at 2016, I wish I’d spent more time reading words between covers and less time browsing Facebook or tending to my Twitter account. Books provide perspective, which is sorely needed right now.

Here are the books that I read and (mostly) enjoyed last year, in the order in which I read them:

Infinite Jest, David Foster Wallace: OK, I didn’t finish this one. But I did get through 548 of the 1,077 pages during my winter break a year ago. Mind-blowing, exhausting and, at times, exhilarating. Someday I’ll read the rest.

Doing Good Better, William MacAskill: How effective altruism can change your life. It has changed mine.

Let My People Go Surfing, Yvon Chouinard: Patagonia is an awesome company. Here’s how it all began.

The Sympathizer, Viet Thanh Nguyen: A Vietnamese spy in California, after the war ended. Beautifully-written, albeit hard to untangle at first.

Far and Away, Andrew Solomon: A disappointing, disjointed collection of travel writings. My expectations were very high because I absolutely loved Solomon’s Far From the Tree and The Noonday Demon.

The Only Rule Is It Has to Work, Ben Lindbergh and Sam Miller: Baseball geeks who hosted the Effectively Wild podcast operate a minor league team for a summer. Hilarity ensues.

The Humane Economy, Wayne Pacelle: Being kind to animals is good for business, the president of the Humane Society of the United States. A look back at a very good decade for creatures great and small.

Hamilton, Ron Chernow: Obsessed by the Broadway musical, I wanted to dig into the real story. Fascinating throughout.

Between the World and Me, Ta-Nehisi Coates: The blogger, Atlantic writer, MacArthur genius and comic-book author writes a powerful letter to his son about being black in America.

Moral Tribes, Joshua Greene: A Harvard professor explains why it’s so hard to settle arguments between groups, and how we might do better.

Hillbilly Elegy, J.D. Vance: It’s not just the economy, stupid. It’s the culture. A memoir that begins in Appalachia and ends at Yale Law School.

The Undoing Project, Michael Lewis: Does he ever write a bad book? This one, about behavioral economists Daniel Kahneman and Amos Tversky, is very good.

For the Prevention of Cruelty, Diane L. Beers: A lively account of the history and legacy of the animal rights movement in the US, from the mid-19th century until 1975.

The Sexual Politics of Meat, Carol J. Adams: Meat-eating and misogyny, and how they, er, feed upon one another.

Why Nations Fail, Darren Acemoglu and James Robinson: With magisterial sweep, the authors argue that inclusive political and economic institutions, not foreign aid or philanthropy, will lift people out of poverty.

And, just for fun, my favorite movies of the year: Moonlight, Don’t Think Twice, The Queen of Katwe, Captain Fantastic, Citizen Four, Snowden, Manchester By the Sea, Arrival, Weiner and OJ: Made in America.