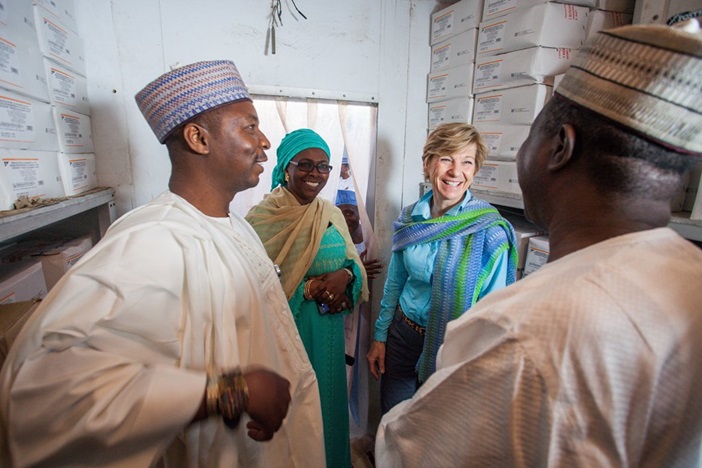 In ordinary times, the words in bold type on the home page of the Bill & Melinda Gates Foundation — ALL LIVES HAVE EQUAL VALUE — might seem anodyne. In Donald Trump’s America, they are radical.

They mean that Asian, African and Latin American lives have as much value as American and European lives. They mean we shouldn’t especially care that iPhones are made in China, or when jobs move from Michigan to Mexico. Hey, maybe we should cheer. After all, the Chinese and Mexican people need the jobs more than better-off Americans do.

Of course, few politicians–not Trump, Sanders or candidate Hillary Clinton–would say such a thing, or even attempt to explain why globalization is, on balance, good for most Americans. But one of the (many) nice things about leading an endowed foundation is that you don’t have to answer to voters. So Sue Desmond-Hellman, the chief executive officer of the Gates Foundation, cheerfully came to the defense of globalization during a #GivingTuesday conversation with Arthur Brooks, the president of the American Enterprise Institute, at AEI.

A physician who early in her career spend two years working with AIDS patients in Uganda, Desmond-Hellmann said.”Globalization opens your eyes and lifts up your spirits.”

True enough, and that’s just one of many good reasons to applaud globalization. AEI’s Brooks asserted that globalization has lifted two billion people out of poverty. While the story is a bit more complicated, there’s no doubt that poverty has fallen dramatically in countries like China, India and Indonesia as they have become integrated into the global economy. For Americans, including the poor, globalization has made consumer goods, from sneakers to T-shirts to large-screen TVs, more affordable. What’s more, global trade enables the spread of innumerable life-saving and life-enhancing technologies, from AIDS medicine to Hollywood (and Bollywood) movies.

That’s not to say that global trade has been good for everyone. Not at all, and Desmond-Hellman said as much: “I respect that people worry about the downsides of globalization.”

In response to job losses caused by trade and technology, the US needs to pay more attention to vocational and technical education, she indicated. “As the world changes…we want everybody to be ready for those changes, and to have opportunities for lifelong learning,” Desmond-Hellmann said.

Certainly the Gates Foundation lives by its all-lives-have-equal-value mantra. In 2014, it spent about $3.2 billion on global health (its biggest program area), global development and global policy, compared to about $513 million on  US programs, predominantly K-12 education, according to its 2014 annual report (the most recent one on its website, unfortunately).

When asked by Brooks what one thing she would say about global health to our incoming president, Desmond-Hellmann said: “I would want President-elect Trump to remember that a health crisis anywhere is a health crisis everywhere.”

Surprisingly, not much else was said about Trump, and the new administration’s potential impact on the Gates Foundation’s work.

While the conversation was lively — you can watch the video here — Desmond-Hellmann didn’t get a single tough questions from Brooks or from the audience. This isn’t because the Gates Foundation is controversy-free, of course. But I can’t imagine that the CEO of any other multi-billion dollar enterprise would be treated quite so gently.

Here are a few topics that I wish Desmond-Hellmann would have addressed:

Power and accountability: Three billionaires — Bill Gates, Melinda Gates and Warren Buffett — serve as trustees of the Gates Foundation, which Brooks correctly described as “the largest foundation in the history of the universe.” Who holds them accountable? Since the foundation does so much work outside of the US, would it be helpful to have a trustee or two from the global south? More broadly, how do the trustees and Desmond-Hellmann listen to their critics? Do they ever hold open meetings or phone calls? The foundation’s work is tax-subsidized, after all.

Sharing knowledge: The Gates Foundation is famous for its rigor. “It would not be an overstatement to say we are obsessed with data,” Desmond-Hellmann said. Why doesn’t the foundation, as a matter of routine, make its evaluations of programs and organizations public? Others would benefit. When I asked Desmond-Hellmann about this last year, she told me that “we should share our lessons.” I don’t see many evaluations on the Gates Foundation website. That’s a missed opportunity.

A technocratic approach: The Gates Foundation takes an overly technocratic approach to poverty at the expense of politics, some critics say. Interestingly, when Desmond-Hellmann was asked what the foundation had learned from making a mistake, she talked about how polio had unexpectedly resurfaced last summer in a region of Nigeria controlled by terrorists, and said the foundation had needed to develop better surveillance, i.e., more technology. Others might draw a different lesson: That countries need stable institutions to make gains against disease and poverty.

I’m sure that Desmond-Hellmann would have been happy to respond to tough questions. And I don’t think the softball treatment she was given is mostly caused by a reluctance to offend people who give away lots of money (although, as Brooks disclosed, AEI gets support from the Gates Foundation). I think the problem goes deeper: Too many of us tend to give people with good intentions too much credit and too little scrutiny. That’s not good for them. It’s not good for us. And it’s not good for those they aim to serve.

4 thoughts on “In defense of globalization: Sue Desmond-Hellmann of the Gates Foundation”