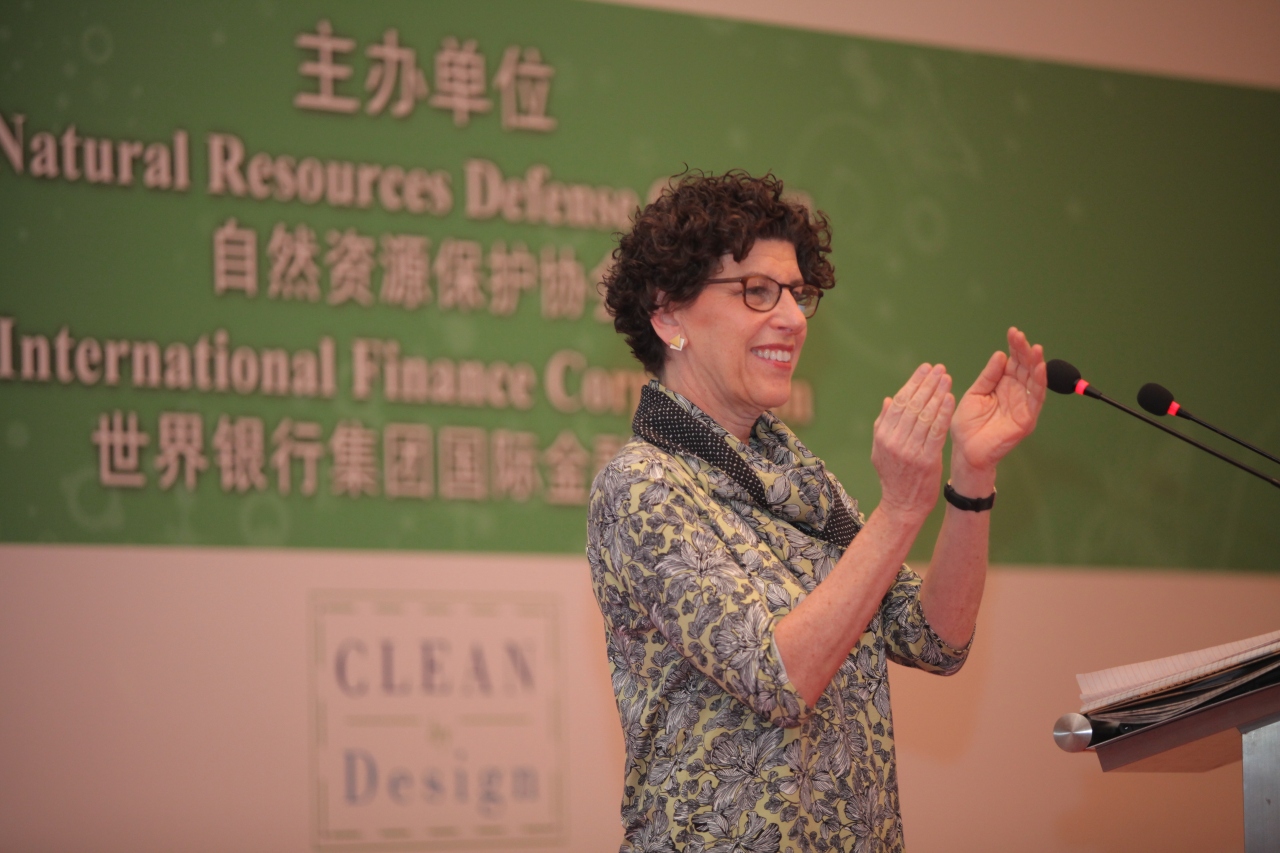 Some nonprofits, and people working inside nonprofits, pursue the same strategy, year after year, without stopping to ask whether they are having an impact. Not Linda Greer, an influential senior scientist at the Natural Resources Defense Council, who for the past 25 years has worked to get companies to clean up their act.

Originally a Washington insider, Greer has lobbied the federal government; worked closely with Dow Chemical, a notorious polluter; wangled her way into Apple to get the company to take responsibility for its supply chain in China; and, more recently, joined the board of a global apparel industry coalition that, as she sees it, needs to move a lot faster to deal with the environmental impacts of fast fashion.

Greer, who has a PhD in environmental toxicology, is street smart as well as book smart. Over a long lunch in Bethesda, MD, where we are neighbors, we talked about how NGOs can drive companies to change, why environmental nonprofits should not take money from corporations and how she has worked side by side with Ma Jun, China’s best-known environmental leader.

Early on, Greer immersed herself in DC policy and politics, working on pesticide and hazardous waste regulation.”I was up on the Hill every day, or over at EPA,” she recalled. “Big companies defended their chemicals to the death. Very difficult work.” she recalled. While environmentalists won some victories, she came to believe — and some of her antagonists agreed — that they might be able to get more done by seeking common ground.

Her debates with Dow Chemical lobbyists led to a novel two-year collaboration between NRDC and Dow designed “to discover whether environmentalists armed with detailed information about a company’s business needs and processes could help it find and carry out profitable ways to cut waste,” as The New York Times reported in 1999. Working at a chemical plant in Michigan, Dow and the environmentalists jointly identified an expert consultant, brought in a mediator and uncovered what Greer calls “amazing opportunities” to reduce emissions of chemicals into the air and water in cost-effective ways.The depth and length of the project led Carol Browner, who then led the EPA, to declare: “This partnership will almost certainly become a model nationally among companies looking to improve the environment and improve their bottom line.”

In fact, partnerships between companies (Walmart, McDonald’s, General Mills) and business-friendly green groups (The Nature Conservancy, WWF, Environmental Defense Fund, even Greenpeace) proliferated during the 2000s. They were generally focused on efficiency, a goal shared by the companies and the environmentalists because it saved money and reduced waste. They improved corporate environmental practices but in retrospect, Greer says, they didn’t go far enough. Often, NGOs and companies devised pilot “trophy projects” that look good in sustainability reports but were scaled across the business. Few companies questioned business models that depend on selling more stuff every year.

Greer turned her attention to China after Frances Beinecke, who ran NRDC from 2006 to 2015, was appalled by the air quality on a trip to Beijing. Like bank robber Willie Sutton, who, when asked why he robbed banks, is said to have replied “because that’s where the money is,” Greer saw she could have the greatest impact in China because that’s where the pollution is.

“China had become the workshop of the world–burning as much coal as we were, and growing much faster,” she says. NRDC had opened a Beijing office, and she decided to press multinational companies to take responsibility for the industrial pollution generated by their supply chains there. “Which industry to work on became the next question,” Green recalls.

The electronics and textile industries are among the biggest polluters of water in China. But until Ma Jun, a former journalist and author who started a homegrown Chinese NGO called IPE (for Institute of Public and Environmental Affairs), pulled together government information to build a database of Chinese factories, the problem was difficult to track. Ma Jun had been using his database to name and shame global companies whose suppliers were polluting the air and water, but with mixed results.

“Apple was very high on the list of problem companies, and he couldn’t get Apple to respond to him–at all,” says Greer. “He was making serious allegations about terrible problems, and they were blowing him off.”

Al Gore to the rescue

Greer knew how to change that. She explained the situation to Frances Beinecke, who called Al Gore, a member of Apple’s board of directors. Not long after, Greer and Ma Jun went to Apple’s headquarters in Cupertino where they spent more than five hours making their case to the company’s executives, who were aggrieved at first but fairly quickly became concerned that they might in fact be responsible for pollution problems in China. This was 2010, and Apple was already facing scrutiny over a series of suicides at Foxconn, its biggest Chinese supplier.

“They were worried about the threat to their brand and reputation,” Greer surmises, and agreed to independently investigate Ma Jun’s allegations. From that point on, she says, the company took its environmental responsibility seriously. “They identified problems and took corrective action and they didn’t cut corners.” She identified powerful and committed executives inside the company, notably logistics executive Bill Frederick and environmental engineer Bob Bainbridge.

“Our work with Apple…has been a kick,” Greer later wrote on her blog. She wasn’t satisfied, of course, pointing to ways in which the company needs to improve. But she noted: “The company is serious and detail-oriented and definitely wants to get it right.” But she counts her work with Apple and partnership with Ma Jun as among her proudest professional accomplishments. “I tease him that he is one in a billion,” she says, and he is certainly tackling one of the largest industrial pollution problems the world has ever seen.

Her more recent work with the apparel industry has not been as rewarding–not yet, anyway.

It began in 2009 with a program called Clean By Design intended to address China’s pollution problems. NRDC works with apparel retailers and brands to help their suppliers’ factories reduce their environmental footprint, which includes water and energy use, as well as discharges of toxic chemicals into waterways. They came up with a set of best practices that were “cheap and easy to implement, and they packed a punch, environmentally.” The Clean by Design protocols have been implemented by about 50 factories that supply Gap, H&M, Levi-Strauss and especially Target. “They’ve been the  star of the show,” Greer says. More are in the pipeline, and the results have been stellar, according to an excellent report on the effort funded by the Oak Foundation:

Each and every mill we tracked in the program—the young and the old, the large and the small, woven/knitted/denim fabric, etc.—reduced environmental impact and made money with improvements.

But, as the report notes, there are more than 15,000 textile mills in China alone. While Clean by Design aims to lead by example, not enough factories have been inspired to follow.

“All carrot and no stick”

“Although the program is precisely the ‘win-win’, business-friendly model that companies tell us they are seeking, uptake is slow as molasses,” says Greer. “It definitely has made me cynical about what industry is really willing and able to do voluntarily about its impacts.”

“It’s all carrot and no stick,” she says.

In an effort to promote the Clean by Design program, NRDC joined the Sustainable Apparel Coalition and Greer recently joined its board. With 175 members whose companies account for about 40 percent of the world’s apparel industry, the coalition should be the venue for systemic change. It has a bold vision: “An apparel, footwear and home textiles industry that produces no unnecessary environmental harm and has a positive impact on people and communities.”

But Green has found that, with a few exceptions, most of the companies remained focused on their first tier of suppliers, the cut-and-sew factories where clothes are made. Those factories are important because they are the locus of labor and safety issues. But relatively few firms have gone beyond this first tier to measure the impact — or even publicly identify — the dye-and-finishing mills where fabric is made, and where the environmental problems are greatest.

“If you don’t even know where your fabric comes from, how can you know the factory is environmentally compliant?” Greer asks. Most companies “are totally stuck in the rut of tier one.”

As I recently reported in The Guardian, the coalition has been progressing slowly towards its goal of measuring and reducing the industry’s environmental impact. Greer believes that the people who represent their companies on the coalition are motivated and well-intentioned. But, she says, “a lot of them can’t make things happen” because they are drawn from corporate responsibility departments and don’t have authority over supply chains.

Because NRDC takes no corporate funding, Greer has the freedom to jeer as well as cheer big companies. Environmental NGOs that take funding from their business partners tend to be gentler. But NRDC doesn’t typically take on companies — there are exceptions, like its current campaign against KFC over antibiotics — so it may be up to advocates like Greenpeace International, with its Detox My Fashion campaign, to shine light on abuses and kick companies more forcefully into action.

After our interview, I emailed Greer to ask whether her corporate work had influenced her own purchases of electronics and apparel. She replied:

Actually, yes, my experiences have definitely shaped my behavior as a consumer; I selected an iPhone intentionally after the company responded as well as it did to the environmental issues we raised and also went with an iPad…

Clothing is more difficult, since there are not a lot of brands I really respect. But I shop at Target and tell everyone they are the real deal and am willing to spend the big bucks at Patagonia to support their excellent effort in this space. Mostly I focus on consuming less, that feels like the best move anyone can make on the clothing front. When people ask me what I am wearing, I tell them the brand but also mention “and I’ve worn this dozens of times” to get the point across.

Because companies aren’t typically held accountable for the faraway impacts of their suppliers, they have little incentive to change. For foundations with environmental programs, there’s an opportunity here–to fund efforts to awaken consumers to the impacts of the clothes they buy. Without activism, Greer tells me, companies may feel free to ignore even business-friendly solutions to problems they don’t think they have.

One thought on “NRDC’s Linda Greer: Cheers and jeers for business”