Less than six months after stepping down as CEO of the Humane Society of the United States, Wayne Pacelle is returning to the animal welfare movement, this time as a part of a political action committee called Animal Wellness Action.

Pacelle left the Humane Society (HSUS) in February under a cloud, as a flurry of accusations of sexual harassment led to revolts among donors and staff–although he retained the support of a majority of the HSUS board until the very end.

The new political action committee, which was registered in May by David Harvilicz, a lawyer and entrepreneur, is affiliated with a small nonprofit called the Animal Wellness Foundation, whose president is his sister, Dr. Annie Harvilicz. Dr. Harvilicz is the founder and chief medical officer of a veterinary clinic and pet care company called Animal Wellness Centers, based in Los Angeles. Marty Irby, a former executive at the Humane Society who oversaw its equine protection and rural outreach departments, is the PAC’s executive director.

What Pacelle will do at the PAC could not be determined. Efforts to reach David and Annie Harvilicz and Marty Irby via email, text and Twitter proved fruitless. The Humane Society, in a memo to its staff, said it had confirmed Pacelle’s involvement with Animal Wellness Action.

Before and after leaving HSUS, Pacelle said he did not harass women at the nonprofit. He has declined to address any allegations in detail.

“I absolutely deny any suggestion that I did anything untoward,” Pacelle told The Washington Post, days before stepping down.

His comeback is resurfacing old questions about how the board of HSUS handled the charges against him, while raising new ones about how HSUS intends to work with Pacelle in the future. With revenues of $230m last year, HSUS is the US’s leading advocacy group for animals.

In talking points distributed to staff [see below], HSUS said it would decide on a “case by case basis” whether to work with Pacelle. By email, Anna West, an HSUS spokeswoman, added: “We will never require any individual staff members to work with Mr. Pacelle or his new organization.”

Last week, Alison S.*, a lawyer who has worked at HSUS since 2010, and one of the women who accused Pacelle of misconduct, resigned from HSUS, citing the board’s reluctance to distance itself from Pacelle. In her resignation email, Alison wrote that the board’s handling of the situation has “made it impossible for me to stay at HSUS and be in good health.”

Alison told me she is grateful for the support she has received from by her supervisors at HSUS and from Kitty Block, the acting executive director. By email, she said: “I have passionately defended HSUS for 16 years and will continue to decry attacks by its opposition and help the organization in whatever way I am able. I just want young women to know that these things really happened. I wish they didn’t.”

By joining a PAC to work on animal welfare issues, Pacelle could be violating a non-compete clause in his contract with HSUS, which operates its own political action committee. The two PACs are likely to compete for donations. By email, West said: “There is a non-compete in his (Pacelle’s) employment contract and the board leadership is aware of the situation and will be considering our options.”

Board chair Eric Bernthal declined to be interviewed, as he ever since #metoo allegations against Pacelle became public in January.

This is a mess, and it’s mostly the fault of the HSUS board.

“There was never enough transparency or accountability,” says Rachel Perman, the director of charitable giving at Tofurky, who has been pressing HSUS to reform its governance.

To sum up the board’s actions, briefly:

On Feb. 1, the board abruptly ended an investigation by the law firm Morgan Lewis into Pacelle’s conduct and voted to keep him on the job. In an email to the staff, Bernthal said the board had not found “credible evidence” to support the allegations against Pacelle. Hours later, facing a revolt from donors and staff, Pacelle stepped down.

On Feb. 28, the board took a different tack. Without naming Pacelle, it released a statement condemning violations of HSUS’s policy on sexual harassment. It said: “We thank the courageous women who came forward and reported their experiences of harassment through our investigation process. We apologize to them. We believe them, and we support them.” Some insiders interpreted the decision not to name Pacelle as a sign that he retains the support of some board members, if not of a board majority.

The accusations against Pacelle come from multiple women, some of whom have accused him of behavior that, if proven, would warrant criminal charges. Again, to recap, because the specifics matter:

-Alison S said she had a consensual relationship with Pacelle when she was a college intern at HSUS, and that when she returned to work there years later, he made repeated, unwanted advances. On one occasion, she said, he pushed her over his desk, rubbed his genitals against her and stopped only after she threatened to elbow him.

-Reasa H, who now works at the Humane Society International, said Pacelle invited her to coffee when she was an intern at HSUS and grabbed her, pulled her close to him and kissed her.

-Ashley R, who worked at HSUS from 2012 to 2017, said Pacelle repeatedly asked her to meet him in his office alone, and once tried to salsa dance with her. His behavior drove her out of the organization, she said.

-Finally, The Washington Post reported that Tulsa S, the daughter of a Humane Society donor, met Pacelle at a black-tie fundraiser, where he told her he’d left something in his room and invited her to return with him. “Once we were inside his room, he grabbed my arm and began to forcefully kiss me,” she told The Post. “I was really scared and really surprised. I did not reciprocate.”

At least one other woman, who does not want to be identified, tells a similar story. Kelly Dermody, a Los Angeles attorney who has been retained by a group of HSUS employees, told me by email: “I am continuing to investigate allegations of sexual misconduct within HSUS over the course of many years.” The threat of legal action may be one reason why the board has kept mum.

All of this has left space for Pacelle’s allies to push back hard against his accusers. Pacelle set the tone when he told The Post that the accusations were “a coordinated attempt to attack me and the organization.”

Coordinated? By who? Pacelle didn’t say. On Facebook, David Harvilicz, who registered the Animal Wellness Action PAC, charged that women going after Pacelle had become “pawns of Richard Berman and the CCF.” Berman runs an industry-funded organization called Citizens for Consumer Freedom that has attacked the animal welfare movement for years.

The claim that women who devoted years of their lives to animal-welfare causes are pawns of its enemies is both ludicrous and scurrilous. In a long essay in The American Spectator, Matthew Scully piled on by calling the allegations against Pacelle “manufactured” and “hyped up.”

Harvilicz also took to Facebook to attack Andrew Weinstein, one of the seven HSUS board members who resigned in protest when the board declined to act against Pacelle. On Weinstein’s page, Harvilicz wrote: “You are a hypocrite and a traitor to the animal liberation movement….Good riddance. Bye bye.”

All of this, alas, can be traced back to the HSUS board’s unwillingness to fully investigate and adjudicate the charges against Pacelle, and then to make its findings public. It’s far from the only example of a nonprofit board failing to provide oversight, but it’s surely among the worst. Unfortunately, there are few checks and balances on nonprofit boards, other than the voices of donors. Let’s hope someone at HSUS is listening to those voices.

Here’s what HSUS distributed to staff about Pacelle’s comeback: 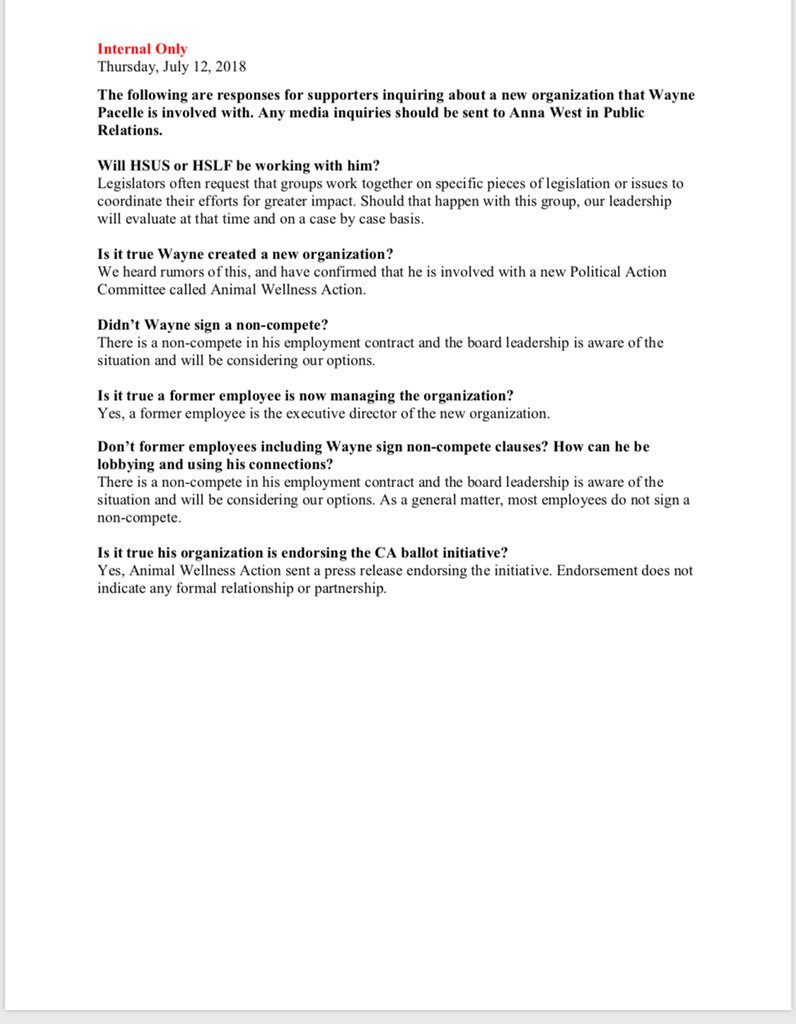 *At the request of one woman who accused Pacelle of harassing her, I’ve removed the last names of the women who previously went public. She expressed concern – a concern that I’ve heard from other victims of sexual harassment – that going public could hamper a future job search or bring retaliation.

UPDATE NO. 1: Marty Irby, the executive director of Animal Wellness Action PAC, emailed me today [July 20] to say (correctly) that I did not call or email him. I did reach out to him on Twitter, but he said: “I don’t consider Twitter messages to be a professional avenue for media inquiries.” Wayne Pacelle, he said, is a volunteer with the PAC:

Wayne Pacelle is a friend to Animal Wellness Action, myself, and other supporters of our organization and has volunteered to help us, and a number of other organizations within the animal protection world. Why would we not accept the unpaid advice and assistance of the country’s leading authority on animal protection issues? He is unpaid, does not have any title, and is not a member of the board or an employee.

The animal protection movement doesn’t have enough support as it is, and as the leader of the organization, I personally welcome knowledgeable volunteers who deeply feel the calling to protect animals. Someone has to be their voice, and we can’t allow obstructionists of animal protection reforms to divide us and hinder our cause. In addition, according to our legal counsel, who has reviewed Mr. Pacelle’s non-compete, as a volunteer, it does not appear that he has violated the agreement.

UPDATE NO. 2: Animal Wellness Action filed a list of contributors with the FEC that includes Josh Balk, a vice president at the Humane Society. That prompted Carol Adams, the activist and writer, to respond on Facebook:

So Josh Balk of HSUS gives $5,000 to a PAC that will be led by former HSUS CEO Wayne Pacelle, who left HSUS after several very serious accusations of sexual harassment, exploitation, and assault, and who, rather than accept accountability, accused his victims of lying. Besides the fact that there is a non-compete clause with HSUS, what person would support a PAC that puts a man accused of sexual assault of interns into a lobbying position that may place him near Congressional interns? What does it mean to all of your peers that you would betray the women at HSUS, women you work with every day? And why is another PAC needed if HSUS already has one? Check a dictionary: Allyship and betrayal are antonyms not synonyms. Your assertion earlier this year of being “an ally” apparently did not come with a $5,000 check to help the survivors; that kind of support you reserve to enable an accused abuser to get back into the game. Josh, how will you defend this tomorrow with your colleagues at HSUS?

Carol’s claim that the PAC will be “led by” Pacelle is wrong, as best as I can tell. Marty Irby says, above, that Pacelle is a volunteer with the group. We’ll have to wait to see just how active Pacelle will be as a volunteer. But his decision not to address the allegations against him in a substantive way is one reason why his comeback, if that’s what this is, has some people angry and upset.

By email, Josh Balk writes that he was merely supporting a friend and colleague with whom he had worked at HSUS for years: “Marty Irby told me he was launching a new animal protection organization and I offered to make a personal donation to support his effort to help animals.”

We’ll have to wait and see just how active Pacelle will be as a volunteer. But his decision not to address the allegations against him in a substantive way is one reason why his comeback, if that’s what this is, has some people angry and upset.

28 thoughts on “The return of Wayne Pacelle”