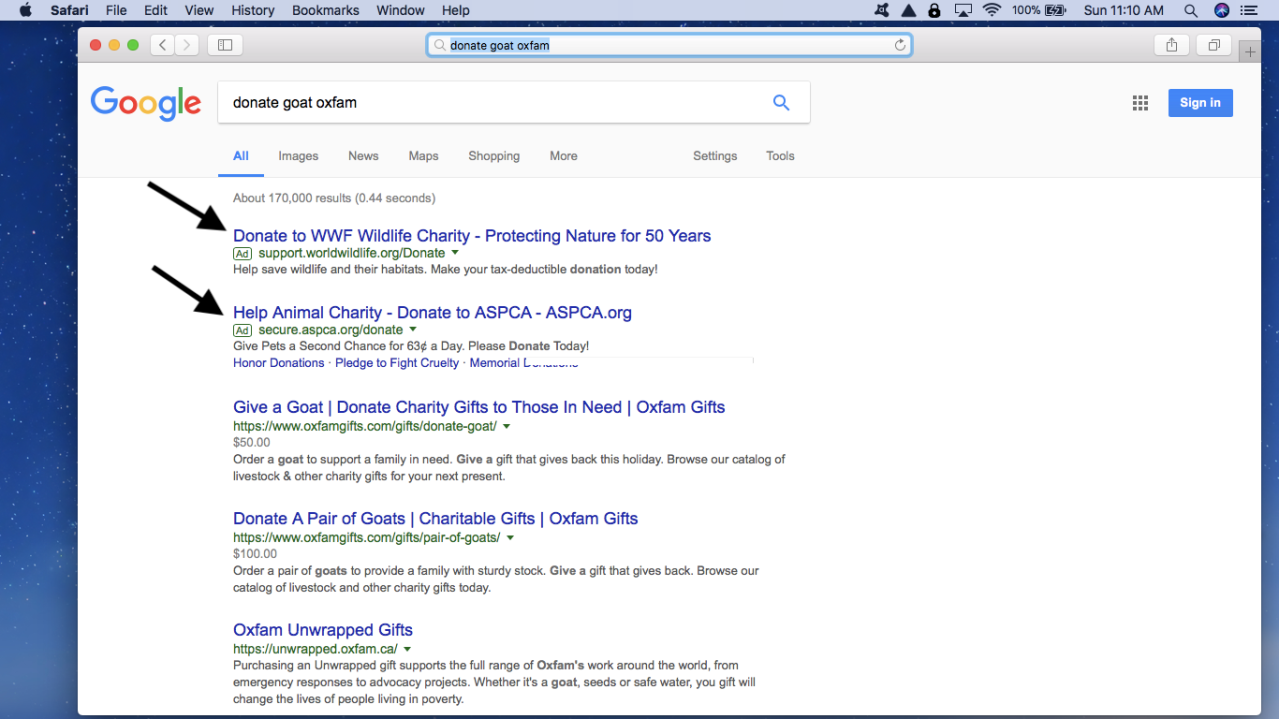 Well, this is odd.

Above, a Google search for “donate goat Oxfam” is topped by ads for the World Wildlife Fund and the ASPCA.

Below, a Google search for “Oxfam goats” turns up ads for two other charities, Compassion International and Outreach International.

That’s hard to know. It certainly appears as if the four charities took out Google ads that included the word “Oxfam” in order to capitalize on the brand name of a well-known global NGO. When I came upon these results after being tipped off by a friend at a small foundation, I surmised that this was guerrilla marketing, NGO-style: Nonprofits poaching on a popular brand as they compete aggressively for donor dollars. Buying search ads using rival brands is not uncommon in the business world. (See The Complete Guide to Bidding on Competitor Brand Names & Trademarked Terms.)

This, however, is not what Google intended when it established Google Ad Grants for nonprofit groups. The popular program provides free Google AdWords advertising—up to $10,000 per month—on Google search result pages to qualified nonprofits. More than 35,000 nonprofits participate, according to Google.

Ad Grants, Google says, are “designed to help organizations extend their public service messages to a global audience to make a greater impact on the world.”

Fundraising by tapping into people’s desire to buy goats for the very poor–a dubious idea, in any event, as we’ll explain–would not seem to qualify.

The story gets stranger. A WWF spokesperson who declined to be identified — which is never a good sign — told me by email

While WWF generally does not share details of its online ad strategy, in this instance we can tell you that WWF is not bidding on any Google ads for the words “Oxfam” or “goat.” As you likely know, Google uses a complex algorithm to determine where to put an organization’s ads, and only Google would be able to answer why our ad showed up in this particular search.

Notice that the use of the present tense. (“WWF is not bidding…”) Nothing about whether it has bid on the word “Oxfam” in the past.

We did purchase the ad word goat and gift, but not Oxfam. I’m sure this came up solely because of those words we purchased in an effort to promote our Christmas Gift Catalog. You’re right, that would be odd to purchase another NGO’s brand name as an ad word for promotion and it’s not something we would do.

The use of the organization name “Oxfam” in our ad was an error. When Google suggested a list of 50+ keywords to incorporate to our existing ads, “Oxfam” must have been included in the list of suggestions and was added as a part of the entire group of recommended keywords. We would never intentionally use the name of another charity to boost our content.

Danielle Arnold of the ASPCA, via email, also challenged my assumption that the ASPCA was poaching:

There are a combination of factors that impact the ads displayed on Google searches, including an individual user’s search history, current bid rates, and Google’s proprietary algorithm, so that assumption is incorrect. Beyond that, we do not comment on our marketing strategy.

Somehow I doubt that Google’s algorithm would insert an ASPCA ad into a search for “donate goat Oxfam,” but maybe that’s just me.

Search for the ASPCA, by the way, and you find an ad from Best Friends, a smaller animal welfare nonprofit:

Google, as you’d expect, isn’t happy about this. Last month, it made changes to Ad Grants. Google told nonprofits that “branded words that you don’t own like “YouTube” or “Google” or names of newspapers or other organizations” are not permitted as keywords. That should put an end to the practice of poaching.

Why blog about this? Primarily because it’s a reminder of how competition works in the nonprofit sector, which is to say, not very well. All too often, NGOs view their competitors as other NGOS, as they seek donors or media attention. There’s more talk of collaboration in the sector than there is actual collaboration.

It’s also illustrates how big nonprofits use data. Witness WWF’s reluctance to “share details of our online ad strategy.” Well-funded NGOS use A/B testing to determine which direct mail or email fundraising messages work best, in order to maximize the impact of their ad budgets. Very few are as rigorous when it comes to testing the impact of their programs to see which work and which don’t. 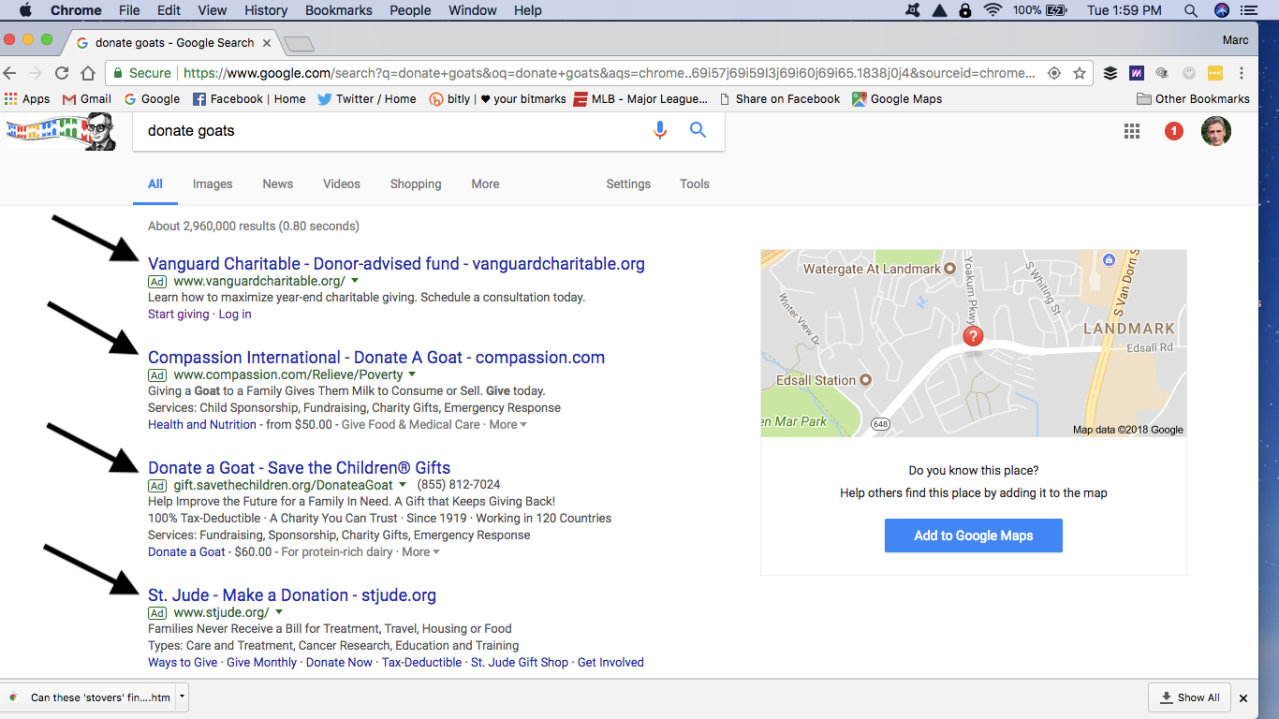 Never mind that buying a goat (or a chicken or ducks) for a poor family at Christmas (or any other time) is a dumb idea.

For one thing, it’s not really a goat. The small print in those charity holiday gift catalogs gives the charity the freedom to take money donated for goats, and spend it on other programs; often they do. In essence, goats are a fund-raising gimmicks. How many goat-giving charities ever report on how many goats they’ve given away, how much they cost and whether improve incomes  for the poor? Not one that I am aware of.

The bigger question is, why would donors in rich countries presume that what people in poor countries want is a goat? (It’s hard enough for me to figure out what my wife wants for her birthday.) Maybe what poor people in Africa, Asia or Latin America want is a chicken or a tin roof or school fees or, gee, cash. I wouldn’t expect someone I’ve never met in a poor country to choose a gift out of a catalog for me. So why would I choose one for them?