Few institutions in the US are as undemocratic as endowed foundations. The executives in charge of foundations answer to, er, no one. They give money away, so people tend to laugh at their jokes, tell them they look well, nod in agreement at their banal remarks. What’s not to like?

As for nonprofits, they pay heed to foundations and donors, but they need not listen to their “beneficiaries,” unless they feel a moral obligation to do so. What if, goodness knows, the people they are trying to serve turn out to be unhappy with the service? Talk about inconvenient truths.

Last week in Washington, a group of about 70 people — the generals and foot soldiers of a growing movement to devolve power to mostly poor recipients of aid in the US and abroad — came together to talk about how to turn that power dynamic of philanthropy upside down. They believe that feedback from constituents “has the potential to unleash massive, timely and necessary changes in the way social change and development are pursued,” in the words of Feedback Labs, a DC-based NGO that convened the first Feedback Summit.

As Dennis Whittle, the executive director of Feedback Labs, has written:

It’s too soon to say but there were signs during the two-day confab that a half-dozen or so forward-thinking foundations, along with a growing number of nonprofits, are starting to figure how to create tight feedback loops that will enable them to solicit feedback from citizens, listen, analyze and, most important, change their practices as a result of what they learn.

“It’s the right thing to do, morally and ethically, philosophically. It’s the smart thing to do,” Whittle said. Now the goal is to make it “the feasible thing to do, financially and operationally.”

Here are three signs that the feedback movement is gathering momentum:

A group called the Fund for Shared Insight, a collaboration of foundations that makes grants to improve philanthropy, has launched an initiative called Listen for Good that intends to fund 50 nonprofits to seek feedback from the people they are trying to help. They will use the now-famous Net Promoter System methodology developed for business by Bain & Co., which is working with the fund to make sure that the simple, elegant and yet rigorous system is deployed effectively. “It needs to be a high velocity loop of feedback, learning and action,” said Vikki Tam, a Bain partner. To the extent possible, the feedback results will be made public, enabling nonprofits to compare their net promoter scores with peers. “It’s so important for foundations to be open about what they do, and what they’re learning,” said Lindsay Austin Louie, a program officer at William and Flora Hewlett Foundation who works closely with the fund. Supporters of the fund include the David and Lucile Packard Foundation, the Ford Foundation, the Gordon and Betty Moore Foundation, the JPB Foundation, Liquidnet (which I wrote about here), the Rita Allen Foundation and the W.K. Kellogg Foundation. 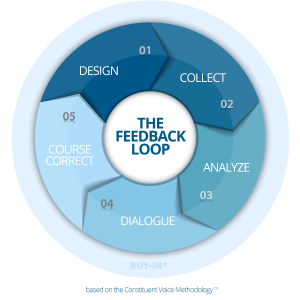 Efforts to build “good enough” feedback loops are underway, aimed at helping small or midsize NGOs measure their impact without having to undertake expensive, long-term randomized control trials.  Thoai Ngo, a senior director of research at Innovations for Poverty Action, talked about an effort called The Goldilocks Project that aims to build “right-fit” evaluation systems, focusing on collecting credible, actionable data in a timely way–that is, feedback to help an NGO change course if needed. Ken Berger, the former chief executive at Charity Navigator, described his work at a firm called Algorhythm which offers impact measurement to small NGOs for as little as $750. “These are organizations that never before had an opportunity to measure what matters most,” Berger said.

Technology is making it much easier to gather feedback, and make sense of it. Louis Dorval is the co-founder of VOTO Mobile, a Ghana-based tech startup that aims to “amplify the voice of the under-heard” by using voice and text messages on mobile devices to survey citizens, as well as send one-way messages. Less than three years old, Voto Mobile has already worked with about 250 organizations, including Unicef and Innovations for Poverty Action. David Bonbright of Keystone Accountability, who is a pioneer in the feedback arena, talked about Feedback Commons, an online platform designed to allow  organizations to “share and compare” the feedback they collect from their constituents.

All these initiatives are designed to improve the development of feedback loops. Before long, NGOs should be able to show how collecting feedback generates better outcomes for their clients. That’s all to the good. Think of that as the supply side of the feedback “business.”

But what about the demand side? Who’s going to fund feedback loops? I’m still a newcomer to the development world but my impression (from reporting on water and sanitation projects, and on cookstoves) is that most foundations and NGOs are not as rigorous as they could and should be about measuring their impact.

This brings us back to the fundamental power dynamic of philanthropy, as Caroline Fiennes of Giving Evidence explained during the Feedback Summit.

“Why don’t foundations ask for feedback?” Fiennes asked. “Because they don’t have to.”

“It’s difficult and it’s a bit painful,” she went on. “If you have made a chunk of money and you want to give it away, in general you will feel good about that, and everybody will love you. Once you start asking questions” — questions designed to find out if the work is making as much of a difference as it can–“you might not like the answers.”

In an essay called What do they want? at Aeon, Claire Melamed elaborates:

While most individual aid workers do care, very much, about the people they work with and for, the actual structure of the aid business offers few reasons for anyone to worry about what aid recipients think or want. Staff in aid agencies need to think about what their funders want to pay for. For their own performance reviews, they need to think about how to demonstrate that what they are doing is achieving the best possible results with the smallest amount of money. So the incentives for spending money on expensive surveys to find out what representative samples of poor people think of their operations are just not there.

And besides, the information might be a threat. What if it turned out that people feel patronised by aid workers? Or that they would rather their food didn’t arrive with logos announcing their indebtedness to foreign governments? Or that they resent being given a T-shirt when really they would sooner just have the money? What if people don’t really want another agricultural programme, and they’d rather have a bus ticket to the nearest town and somewhere to stay when they get there? These kinds of discoveries could be quite discomfiting for the agencies themselves – though in the long run, they would presumably do a better job.”

This is why those funders (like the foundations behind the Fund for Shared Insight) who push for feedback loops and rigorous evaluation deserve a lot of credit. Let’s hope their numbers grow.

12 thoughts on “The disruptive potential of feedback”